She belongs to Sarah the FBI pup

Sapphire is sweet, but at the same time also sassy and cocky. She likes to make her own rules and hates having to do what she's told. But she's really a very happy puppy and tends to show her bubbly and Happy-go-lucky side often.

She had a crush on Tripod for the longest time before he went with Cadpig. After he did, she felt hopelessly lost and didn't know what to think. 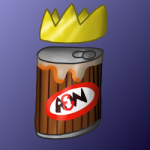